In its first decade Forum organized the Tükrös camps. The decision to set up a regular meeting point for friends and family connected through Tükrös Ensemble, and create a camp with a cultural profile focusing on the folk heritage where generations gather and have fun was made in 2001. Initially aimed at a smaller social circle and locals in the area, the camp quickly became so popular that people from across the country as well as outside its borders were taking part.

A truly family-friendly get-together by 2015 Tükrös Camp offered various programmes for over 50 children and as many adults.

Teaching and practicing Hungarian folk music and dances for all generations are high on the camp’s agenda, ensured by active participation of professionals. Beginners and those more familiar with the the subject can take part in their respective groups, while children are taught in various age-groups by several instructors who aim to keep the sessions playful and fun.

Responding to the need to take home skills and experiences received in the camp, Tükrös Ensemble published 2 CDs: Let’s be Joyful and Uphill-Downhill. In 2008 Éva Korpás, the band’s singer came out with a solo album entitled Csalogato, giving a contemporary take on folk songs in the primary school music curriculum, accompanied solely by acoustic instruments. 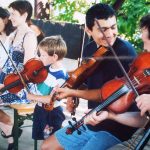 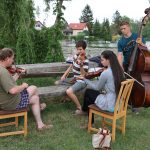 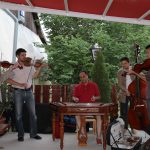